The European U-19 for girls, Albania starts with a triumph over Latvia 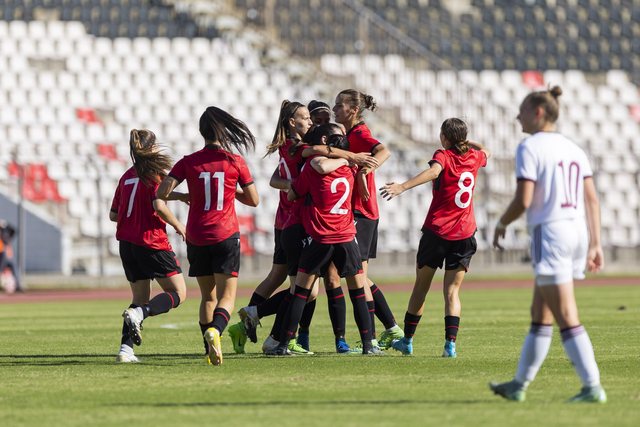 The first two matches of Group B in the Women's U-19 European Championship Eliminators, which are taking place in Albania, were played today. The Albanian U-19 women's national team has started on a good foot after beating Latvia with a score of 3-1 in the challenge played at the "Elbasan Arena" stadium. A very good performance by the red and black girls who dominated throughout and got three well-deserved points.

The red and black girls show their superiority in the first minutes, getting closer to the opponent's goal and they find the advantage goal in the 9th minute through Klaudia Borçi who does not forgive in the area from a close shot. The Albanian representative uses the good moment and continues to attack, risking several times. In the 20th minute, it is Bora Fucia who with a strong shot from a distance beats the Latvian goalkeeper and scores the second goal. Albania's girls are not satisfied with that and in the 24th minute they find the third goal through Arlinda Kodra after a persistence in the area.

The first half ends with a 3-0 lead for the red and black girls, who also had other opportunities to score, such as the crossbar hit by Iliadhi with a long-range shot. The second half is more balanced with both teams having chances to score but not finding the net. In the 83rd minute, Albania remains with 10 players after the defender Rexhina Maxhalaku is punished with the second yellow card and automatically with a red card after a foul in midfield. Latvia manages to find the goal of honor in the 91st minute through striker Evelina Uspalevica.

In the other group match played at the "Egnatia" stadium in Rrogozhina, Romania thoroughly won against Armenia with the result 8-0 with goals scored by Horvath (2), Jivan, Borodi, Bratu, Pînzariu, Botojel and Sigheartau. Romania together with Albania lead the group after the first matches.

All the matches of this group will take place in Albania on October 5, 8 and 11. Three days later, the red and black girls will face Romania, at 14:30 at the "Elbasan Arena" stadium.

The third and last challenge of Albania U-19 for girls will be against Armenia, on October 11 at the "Elbasan Arena" stadium, at 14:30.

Meanwhile, the other matches of the group, of the friendly teams, will take place in the other modern Albanian facility, "Egnatia Arena" in Rrogozhinë.