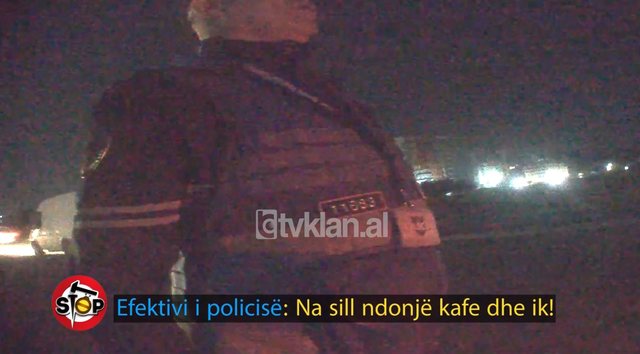 The journalists of the investigative show "Stop" were informed by a citizen that in the Kashari area, in the evening, while he was stopped in the car with his girlfriend, several policemen approached him.

The complainant explained that the policemen took money from him saying that otherwise they would escort him to the police station for obscene acts even though he was just discussing with his partner.

Whistleblower: Hello, show "Stop"! I am a citizen from Tirana. I want to share a concern with you! In the area of ​​Kashari, at 9 or 10 in the evening, I don't remember exactly, I was with my girlfriend. I stopped there to discuss a problem with my friend. I suggest you to watch the policemen, as they are very corrupt, they come and take money for no reason!

Complainant: I was discussing something with my girlfriend. I opened my arm to talk since we were also at the wheel, I opened my arm there, when after a few minutes a couple of police officers came to us, they asked for our documents, ok, very nice, we gave them. No yes, what do you want here? We will accompany you to the police station. What's wrong with you? What are you doing with this chick? Yes, nothing, what are we doing, I told him. So we had something to discuss and we are discussing. No, I'll take you to the police station. Yes, boss, I told him, it's a shame to take us to the police station, without anything, without this... Well, he said. Think for yourself, he said. I had some lek in my pocket there, I don't remember how much 40 or 35 thousand lek, I don't remember well now, I gave them as much as I had. Well, he said, don't come here anymore, he said, because there are shameful acts. They even came by private car. They were more private cars, they went down there and started with everyone in turn, who were there. We didn't move because we thought we weren't doing anything.

But this is not the only case. Another citizen reported the same situation.

Complainant: We were in an area of ​​Tirana with our boyfriend, discussing something, and at one point the police approached us. According to them, the conversation we were having at that moment in our vehicle was inappropriate behavior in a public environment. We wanted to discuss it and clarify it, since, after all, I am a girl and if my family found out, it would be a different situation. The operatives demanded a bribe. Of course, they did, and I was surprised by this, since it was assumed that it was not actually inappropriate behavior. We were inside the vehicle discussing, like anyone else, who can discuss outside, in a street environment or in a car.

"Stop" agent: You saw me in this place, or in any other place outside... that there is a big problem.

Police officer: Bring us some coffee and run away!

"Stop" agent: I'll give you some twenties, because I don't have much! Police officer: Go! Move, from here, that the next service will come and.../tvklan

The agenda of the summit between the leaders of the European Union and the Western Balkans, which will be held tomorrow in Tirana, is revealed. 9:30 – ...