A November 8 for the Albanian right 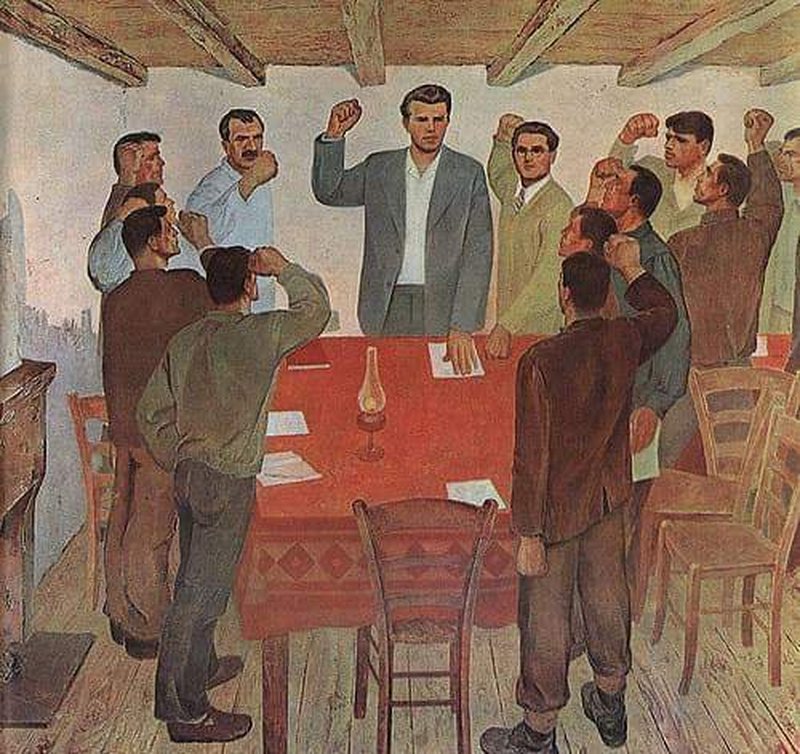 Exactly 80 years ago, the Communist Party (then Labor and now Socialist) of Albania was founded. Few events have had more consequences and impact on the history of the country than this, It can be said that the consequences continue to this day.

This painting has done in art, what Enver Hoxha and the Enverists did in the history books: they rewrote the history of that meeting by inventing a role that Enver Hoxha did not have, changing the positions around the table, the roles of the participants, wiping the faces of the majority who were convicted and declared enemies, or it became unacceptable to mention them. This includes two Yugoslavs, Miladin Popovic, and Dusan Mugosha, who turned Enver from an accidental participant in the meeting into the main figure of the party.

It can be said that Hoxha's first step towards power and reign in Albania for almost half a century was precisely to win the heart and sympathy of the two Yugoslavs, who due to the inferiority of the Albanian communists and the division of the three founding groups (Shkodra, Tirana, and Korça), became arbitrators and unofficial and unelected leaders of the new Albanian Communist Party.

Without the presence of these "ambassadors" from abroad, rival groups would have continued to resent, and it is no wonder that Albania would have ended up with two, if not three communist parties, as is customary.

Without Mugosha and Miladin, it is not known whether a figure as manipulative and dominant as Enver would have come on the scene and had had time to strengthen his leadership position so much.

It is much more likely that in addition to the civil war that was an integral part of the anti-fascist war in Albania, there was also inter-partisan war. This would make the Fronti less powerful and the Albanian left wing to remain as divided into ideological and provincial lines as the right-wing.

Unlike what happened in the left camp, the Albanian right had no arbitrators or external figures to stand on the sides and be able to harmonize positions and unite the barrels of the weapons of non-democratic, at least Albanian anti-communist, factions. north to south, from west to east, Republicans, and legalists, left-wing non-communists, and right-wingers of various colors, especially nationalists.

Perhaps, unlike the internationalist left, the right, by nature, finds it more difficult to accept an external mediator, a conciliator of the parties that comes with similar ideological credentials.

However, today, 80 years after the event that tore the modern history of Albania in two, it can be said that the problem of the Albanians was probably not simply the establishment of a Communist Party with friends in Yugoslavia, allies, and masters in half of the continent that turned red from socialism, but the right did not have its "November 8".

Nationalists and anti-communists hoped in the last years of the war that an outside intervention - perhaps the "British" - would create a more balanced situation in Albania, as was created in neighboring Greece where the civil war continued until 1949, but this did not happen. . The British and Americans who entered Albania, unlike the Yugoslavs, not only could not force the Albanians to join a front but were themselves undecided and divided.

Only after the war, when they began planning a foreign intervention in Albania, did the Americans show little of the arrogance and impatience that should have been shown from the beginning to the Albanian anti-communist disputes forcing them to unite.

The irony that this 80th anniversary comes at a time when the crumbling right in Albania is splitting once again under the fever of the next inter-fraternal war, is truly poignant. It is really impossible to turn back time and see the way how they got here, from the huge pile of beetroot lessons.