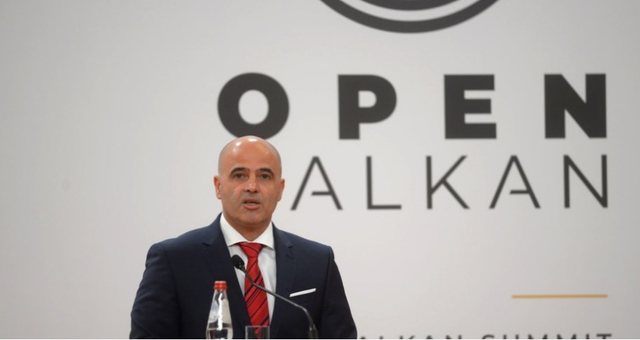 The Macedonian opposition has blocked the adoption of several laws in the Assembly related to the Open Balkans initiative.

Agreements for free access to the labor market, for cooperation in the field of veterinary medicine and food safety, as well as for electronic communication and identification, have been blocked in the Macedonian Assembly committees led by the opposition party, VMRO DPMNE.

The chairman of this party, Hristijan Mickoski, said on Wednesday that the proposed laws will not pass for approval in the plenary session until the Government informs the opposition about what the initiative is about and what the goal of the Open Balkans is.

He said that he is waiting for the Prime Minister, Dimitar Kovacevski, to invite him to a meeting and clarify what [North] Macedonia wants in a regional group with Serbia and Albania.

"When we get information about the purpose of the initiative and what it brings to our country, then we can sit down and talk more concretely about support or non-support."

"I heard in an explanation that the initiative is for good neighborly cooperation, but I often ask the question of how two of these three countries that are in the Open Balkans are bordered", declared Mickoski, alluding to Albania and Serbia which do not border each other.

Meanwhile, the Social Democratic League, which is led by the Prime Minister, Dimitar Kovacevski, asked on Wednesday from the VMRO DPMNE to enable them to ratify these agreements.

"It is about agreements, with the ratification of which the citizens of North Macedonia, Serbia and Albania will be able to work in any of the three countries without obtaining a work permit, without any obstacles, without applications and waiting, without administrative costs. These agreements will provide new jobs, filling the shortage of personnel in the private sector in each of the three countries", stated Mile Taleski, MP of SDSM.

The Open Balkan initiative is the continuation of the Balkan Mini-Schengen, presented in Novi Sad, Serbia on October 10, 2019, by the leaders of Serbia, North Macedonia and Albania.

The Open Balkans is said to aim to enable the free movement of people, goods and services in the Western Balkans region.

Kosovo, Bosnia and Herzegovina and Montenegro are not part of it. /Rel

The agenda of the summit between the leaders of the European Union and the Western Balkans, which will be held tomorrow in Tirana, is revealed. 9:30 – ...