The separation from the life of the painter Sali Shijaku, Meta: He turned the most epic events of history into art 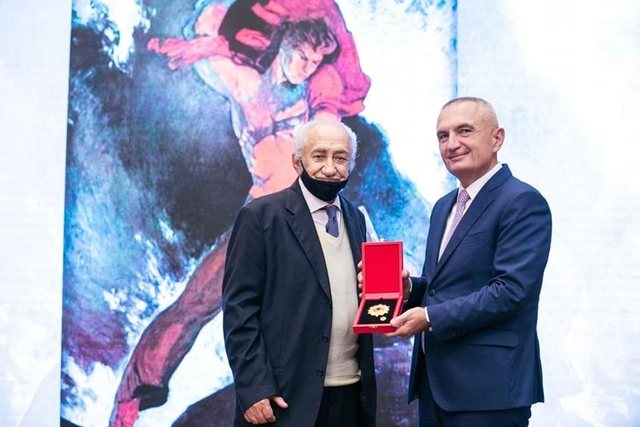 The head of the Freedom Party, Ilir Meta, reacted after the death of the well-known painter Sali Shijaku.

In a condolence message, Meta writes that the death of Shijak is a great loss for the entire nation.

Meta describes the meetings and conversations with him as unforgettable, while adding that with his talent, he transformed the most epic events of history, the spiritual strength and heroism of the Albanian into art.

"A great loss for all the separation from the life of the Honor of the Nation, the well-known artist, Sali Shijaku, one of the most prominent and important Albanian painters of the 20th century. Meetings and warm conversations with him will remain unforgettable for me, as will the endless gallery of his artistic works and monuments, which exalted national culture and art.

Sali Shijaku was the painter of one of my most beloved Heroes, Vojo Kushi. He was only 9 years old when he was awakened in the middle of the night by the sounds of guns and bombs. He had also experienced as an eyewitness one of the most heroic events of the Anti-Fascist War, the glorious Epic of the Red Hill. From that day on October 7, 1942, he lived with that event and dreamed of immortalizing his Hero Vojo Kushi.

But when everything was finished, the censorship blocked his painting because Vojo on the tank was barefoot and without shoes. That's why they asked the artist to "wear" Hero's shoes. But this overturned the whole work of the Master. So he sent them again without changes. "And where are the shoes?", they ask him. "Didn't the Party say that the barefoot people made the war", - answered the artist slyly. "You're right, they told him, it's approved."

This is how the famous painting "Vojo Kushi", by our great painter, the People's Painter, Sali Shijaku, survived to be inherited by generations as a masterpiece realized with rare skill that embodies in art an unforgettable event of the Anti-Fascist War. .

With his extraordinary talent, he transformed into art the most epic events of history, the spiritual strength and heroism of the Albanian, the values ​​of love for the Motherland, Nation and Freedom, as well as a variety of human figures. He created an infinity of magnificent artistic works and monuments, such as his other masterpiece, the Hero of National Freedom, Mic Sokoli.

For all these extraordinary values ​​and contributions, the memory of the Honor of the Nation, Sali Shijaku, will remain unforgettable and his artistic heritage will always be highly valued. My deepest condolences to the beloved Shijaku family, collaborators over the years and the entire artist community for this irreplaceable loss! May he rest in the well-deserved peace" , writes Meta.

Albania-Kosovo in an Assembly for the 110th anniversary of Independence

Provocations in Qatar, Berisha: To exclude the Serbian national team from the World Cup

Tension at the press conference, Granit Xhaka is provoked by Serbian journalists, the Helvetian media director revolts: Enough is enough

Albania-Kosovo in an Assembly for the 110th anniversary of Independence

The first joint Albania-Kosovo meeting, organized on the eve of the 110th anniversary of Independence, has started in the Assembly. The first to speak was Spe...