The first 20 electric buses arrive in Tirana, they will be put into circulation within August 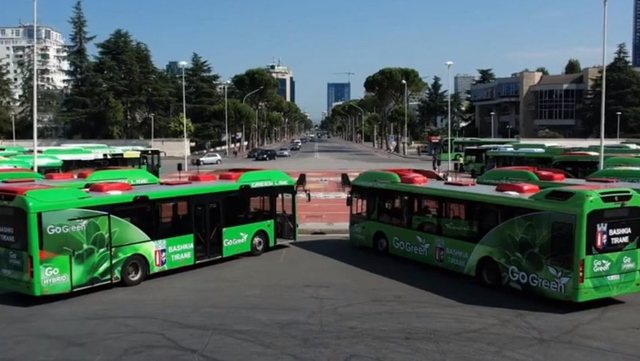 20 electric buses will be put into circulation within the month of August on the new Unaza line in Tirana. The buses were introduced this Saturday by the Municipality of Tirana in "Mother Teresa" square.

It is learned that the investment will be gradually completed with another 22 funds. The new ecological buses come within the framework of an intergovernmental agreement signed between Germany and Albania for the financing of the project "Green Transport of Tirana".

"Today we are taking an unprecedented step and we are probably the first in our region with a green fleet, something we have promised and I am glad to make it a reality. It is a process of modernizing Tirana's public transport, started from the time of Edi Rama, suspended for 4 years, and today thanks to a titanic work has become a reality.

Today we are in a situation where pollution has become a major topic. It was not like that once. But as we saw what happens when there is drought, with floods, earthquakes, pandemics, as we saw what happened in Germany, this line today is also a kind of peace we have with nature.

We are in the same step with many cities in Sweden and far ahead of some Balkan cities, but we must maintain this ambition until the end. Today we have the first electric fleet, but there are 6 or 7 companies that have 50% of their vehicles electric. If we continue in this direction, I believe we will have the city with 100% electric taxis. In the entire route of 13.2 km we have zero pollution produced by these buses, as well as by the electric taxis of Tirana, or the electric fleet of the Municipal Police. "I am glad to see more and more companies, banks, beverage companies, that are transforming their fleet into electricity," said Veliaj.

For the first time in Tirana, electric buses were tested in 2017, but this project was suspended for four years. Hybrid buses will now be used at 66 stations.