Rama claims that "Open Balkan" increases revenues: How can it be a Russian or Chinese vision? Shehu: Resign like Zaev 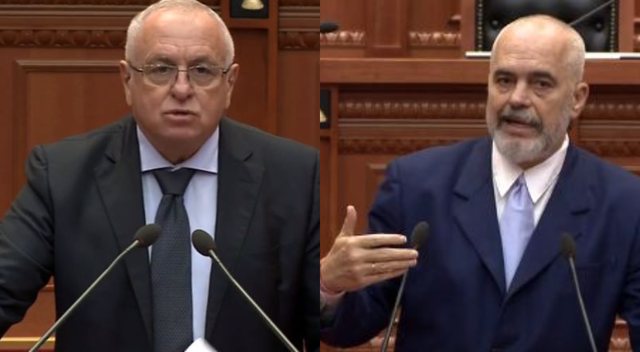 Prime Minister Edi Rama has responded to the request for clarifications on the "Open Balkan" initiative of the Democratic MP Tritan Shehu, focusing on the benefits he claims that the economy has from this initiative.

According to him, the signing of the agreements provided by this initiative reduces the costs of businesses that export to these countries. He added that regardless of whether the opposition wants it or not, Albania will continue to be part of the "Open Balkans" or "Open Balkans".

The Prime Minister said that this initiative will increase revenues in total production in the country. Rama said that "Open Balkan" is built on the four freedoms of the EU, the movement of people, goods, capital and services.

"We live in a geographical area that we have not chosen and we should stimulate the production of exports. While these incentives are related to a fragmented market that does not stimulate the growth of production or exports as stimulated by the common space.

I am giving you an example since you quoted the Minister of Foreign Affairs of Montenegro, to transit through Montenegro only the cost for veterinary control is 80 euros, plus 20 euros for the customs agency. So 100 euros, here I am not talking about the cost of waiting.

I want to add that the mechanism of the Open Balkans and those agreements that we are making, some of which will be signed a few weeks before the holidays here in Tirana, will create facilities for about 500 Albanian companies. I would suggest you contact and ask these companies.

I say this because there are some questions related to geopolitics, not Russia, not China, not the devil, not Satan. How a Russian or Chinese vision can be, the vision of the Berlin Process, I do not know. I know that the Open Balkans is an implementation unit of the Berlin Process. "I know that we have notified all the countries" , said Rama.

Tritan Shehu replied and asked Rama to resign, taking Zoran Zevi as an example. He stressed that the prime minister had failed with "Open Balkan" and that he had become a spokesman for Serbian President Aleksandar Vucic.

"I would ask for your resignation. I ask you to do what Zaev did, it is dignified. In a democratic society this is necessary. Vucic is his master's spokesman. Do not become the spokesman's spokesman. Albania has only one future, that "Europeans, which you put in danger in this way" , said the deputy.

"We are dealing with the overlap of two projects, of Greater Serbia and the new Yugoslavia, and you as prime minister became a supporter of it, avoiding the interests of Kosovo. Today it is clear to read what is happening in Bosnia or Montenegro. or on the issue of the border between Kosovo and Serbia.

The initiative is unnecessary and causes great damage. This initiative will fail, as seen. "This contradicts our interests, Kosovo as well as the interests towards EU integration" , said Shehu.