A wish and some misery: The American Ambassador and the celebration of November 29th 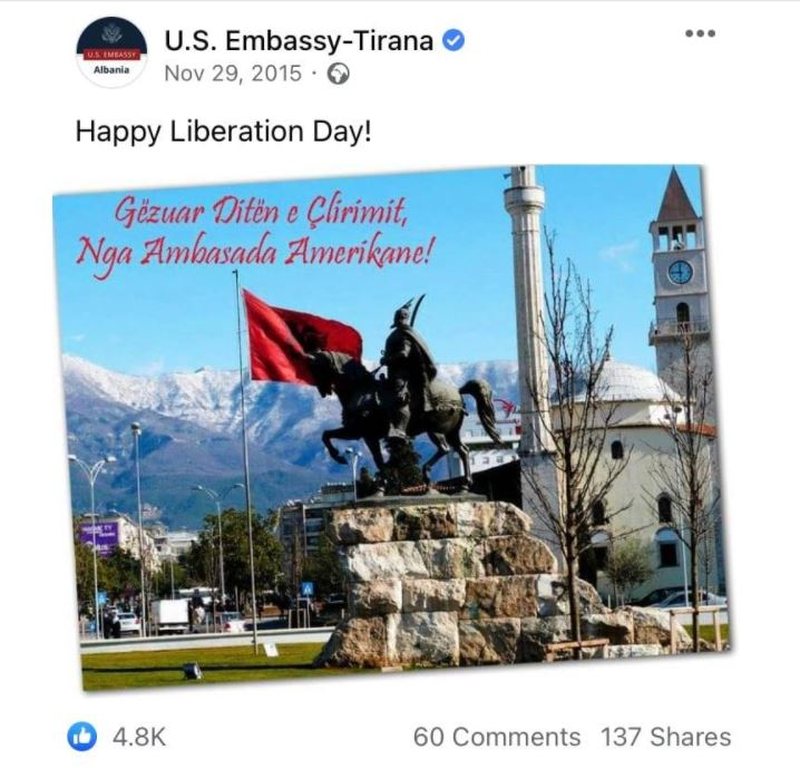 As long as the real panties are worn, the lie has fallen on the surrounding world, says more or less the expression of an American author. I remembered this week as I watched full of serious and respected people believe, repeat, and then denounce in revolt an untruth, which revolves only because it fits a political narrative of the day.
I am talking about the attacks that are being made on the Ambassador of the United States of America, Yuri Kim, for a wish of the embassy for the holiday of November 29 in Albania.
The premise is that it is Kim who is the first US ambassador to make such a wish. For this reason, it is seen as clear proof of its connection with the communist left, etc.
A little verification before the indictment is issued would be a good thing, but who has time for verification when it seems like they find the "final proof" that proves all the arguments.
Now back to the ground: the November 29 greeting did not come from Ambassador Yuri Kim but the US Embassy. Most importantly it is by no means the first time it happens, but it is an annual practice. The Embassy regularly congratulates Albanians on every holiday in the official protocol of the country.
It is a practice that happened before Ambassador Kim came and that will continue even after she has been replaced by someone else, as long as Albania has an official holiday on November 29.
Where were these attackers and accusers who mourn the victims of communism, when the embassy congratulated Albania in 2018, 2016, 2015, etc? There is no need for any major research work. Just search the Facebook page of the US Embassy to find the annual greetings on this date.
Congratulations for November 29 were also made when Alexander Arvizu was in Tirana, an ambassador whom the right had in his heart, while the left attacked him.
What suddenly changed that became famous this year for the greeting?
The work is simple.
First, do you want to criticize the ambassador? Find something he said so that you do not look like you are slandering and manipulating public opinion.
Second, you do not want to receive congratulations on November 29? Take it off as a national holiday. This is not a new holiday. It has been 31 years since communism fell. We had plenty of time to modify the festive calendar. Especially when you consider that during the half years of pluralism in power has been the Albanian right.
What have the harsh critics of Ambassador Kim done all these years to convince the Albanian right to remove this holiday forever? Former political persecuted and their families may not be in the majority, but they are a sufficient force of votes without whose help the DP cannot come to power. They have always been clear on this point and others like these.
Most of the energies of the political debate have been consumed more by the disagreement to leave it on the 29th or to bring it to the 28th holiday than on the essence of the event and its significance in history.
I remember when President Bujar Nishani, President of the right, regularly paid homage on November 29, not because he believed in that date, but not to violate the existing law in force. His main message was the same as this writing. We can not eat with two spoons, if we do not like the law, let's try to amend it again.
The holiday date, after all, is just the tip of the iceberg. It is no secret that the former persecuted have waited (and are still waiting) desperately for the Albanian right to do more for the survivors of communism, to review not only history books but also ideological extensions in art and culture. of society. After so many decades, they have expected to have more right-wing leaders representing their strata, as well as a more connected and continuous vision with the democracy and patriotism of the pre-communist period in Albania. Without leaders who have experienced at the expense of the oppression of communism and those who establish a natural connection with the experiences of the victims of communism, and further of the nationalist, monarchist, republican, conservative currents of 1912-1939,
This was perhaps acceptable in 1990 when all intellectuals and educated people were products of communist schools and the need of the time was simply to overthrow the regime and create a pluralistic system with the necessary freedom of speech. Today, more than 30 years later, what represents the Albanian right remains an evasive topic. Even the last battle that is expected to culminate this month for the leader of the Democratic Party seems to me to have left many of them foreign. Certainly, this battle more than the protocol congratulation on November 29 or the treatment of the communist legacy is the reason for the public reactions against the ambassador.