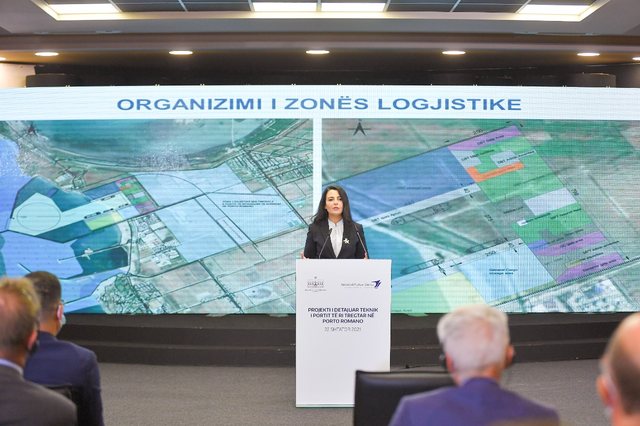 The competition for the project for the construction of the new port in the area of ​​Porto Romano in Durrës has attracted the attention of the most famous companies in Europe, but also beyond, as well as with long experience in the field of port and infrastructure. In the competition for technical proposals, for the construction of this work, 16 operators participated while 5 of them were selected for the final stage.

Their proposals were presented in Tirana in the presence of the Minister of Infrastructure and Energy, Belinda Balluku, the Director of the Durrës Port Authority, Pirro Vengu, representatives of the Bid Evaluation Commission and those of the companies participating in the competition.

It will now be the Bid Evaluation Commission that will select the winning company, which will draft the final project.

In his speech, Director Vengu said that the competition for the details of the Project opened 3 months ago, as there has been great interest from well-known international companies. He further added that such projects create opportunities for the recovery of the maritime sector in Albania.

"In accordance with the economic and development vision of the Government, we have asked the competing companies to devise not only a Port, but a genuine logistics hub. We have requested this because the current capacities in the Port of Durrës are insufficient to face the regional competition and the increasing volumes of maritime transport ", said Pirro Vengu.

Minister Belinda Balluku, in her speech, praised the fact that already the projects designed by the Albanian Government are attracting more and more the attention of well-known companies not only in Europe, but also beyond. The Minister of Infrastructure and Energy stressed that the new port will have an impact not only in Albania, but in the entire region.

Durrës is turning into a European tourist destination and a reference point for the Mediterranean, said Balluku, and for this reason the current port for the environmental problems it causes can no longer stay in that part of the city. The relocation of the current port also paves the way for the launch of the project for the construction of the waterfront.

The winning company will draft the final project and then the procedure will continue with the opening of the international competition for the construction of the new port which will be set up in the Porto Romano area in Durrës.