Ferrari loses control on the Levan-Vlora axis, the 53-year-old dies

Albania with satellites in space, is Rama imitating Erdogan's project 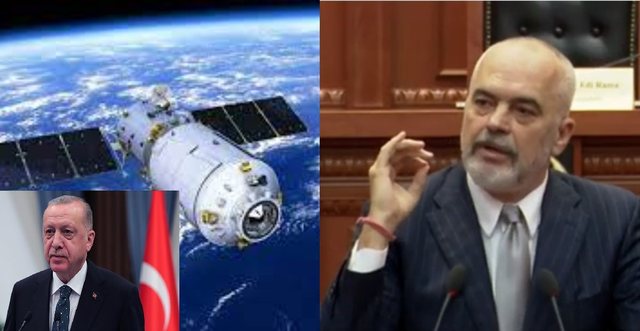 Prime Minister Edi Rama stunned everyone when he spoke at the last session in parliament when he spoke about the launch of two Albanian satellites in space.

The surprising statement caused not a little surprise, but also a stream of ironic reactions on social networks.

Despite the fact that the hall burst into laughter, Rama insisted that with the satellites "Albania 1" and "Albania 2" it will be possible to improve the fight against crime.

Today, Rama also published on Facebook a video with the launch of satellites and the conversation with an expert of "Space X".

But, how did Rama's idea come about?

The socialist majority of 8 years has 'benefited' a lot from the cooperation and the very close relationship of Rama with Erdogan for other projects in this direction like the one with 'Air Albania'.

The prestigious "The Guardian" writes about a 10-year spatial plan of President Erdogan, whose ambition includes touching the moon, as well as launching intelligent satellites.

"In January, Erdogan had a phone call with Elon Musk, director of SpaceX, the US private space exploration company, to talk about co-operation with Turkish companies. "In cooperation with SpaceX, Ankara introduced the wind generation of the Turksat 5A communication satellite, which will be used for both civilian and military purposes," writes The Guardian.

It remains to be seen how this major project will develop and where Rama will find the financial revenues that reach fat figures.

The Russian president boasted that he alone decided to invade Crimea. Now more than 100,000 soldiers are waiting for his orders to march on the border with Uk...

He fatally injured the old man, then threw him in the canal, the driver is arrested after 10 days in Elbasan

Polar cold / Arbri Road is blocked, some villages in Dibër are isolated

Ferrari loses control on the Levan-Vlora axis, the 53-year-old dies

"You are a traitor", Abazovic faces outraged protesters: Look for betrayal elsewhere

Deputy Minister of Infrastructure: Albanian politics has failed to give hope

Who is protecting Edi Rama? Democrats clash in 'Politiko'

Shots fired at a bar in Shkodra, first details

Ivi Kaso: The problems in the DP did not start on September 9, as the vote for the presidency was distorted